Getting to know... Qt for Python

May 28, 2020
I recently took a look at Dash which seems great for data visualization, but I have a project for which I'd love to build a user interface. I previously used PySimpleGUI and the result was to my satisfaction. However, there was something left to be desired. In any case, that brings me to Qt (pronounced "cute") for Python. Let's check out the documentation and see what we can do with it.

Right off the bat. The `hello_world.py` seems more difficult to create something simple (versus PySimpleGUI). However, I imagine all this complexity is what eventually enables a more advanced user interface (I later learn about QtQuick/QML).

Create a new environment variable named `QT_QPA_PLATFORM_PLUGIN_PATH` and point it to the above path.

Qt for Python Getting Started

This section was about "building Qt for Python from source." I was not interested in this.

This section serves as a table of contents to all the modules. There are five major categories: "Basic Modules," "QML (Qt Modeling Language) and Qt Quick," "Data visualization," "Multimedia," and "WebEngine."

This is a simpler "hello world" application than the one shown previously in "Qt for Python Getting Started."

This example shows that an application can be designed using QML, a declarative language. A basic application consists of a QML file and a python file which loads the QML file.

The page makes a note about programming for desktop.

The page said not to worry about what a slot is, but I felt compelled to look into it. The high-level idea seems to be that objects can have inputs called slots and outputs called signals. In the design of an application, one can connect signals to slots.

I read through the page and then I copied the complete code at the end into a file called `dialog.py`. Run it using `python dialog.py`.

Interesting. Apparently one can use a program called Qt Creator to form the user interface file, the page gives an example code for a file named `mainwindow.ui`. This file can then either be imported as a class (after converting it with `pyside2-uic`) or loaded directly (with `QUiLoader` from `PySide2.QtUiTools`). The final example code uses the latter method (loading the UI file directly) and is called `main.py`. However, I named it `uifiles.py` after the documentation page.

Fix: the code uses the library QIODevice but forgot to import it. So I just added the import (e.g., `from PySide2.QtCore import QFile, QIODevice`). 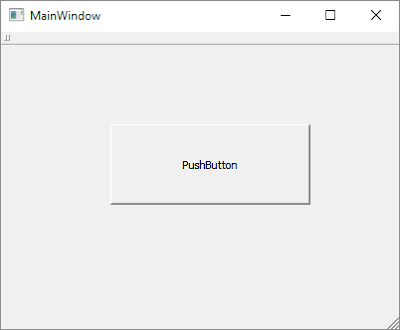 Chapter 1 - Reading data from a CSV

The first example uses pandas to read a CSV. The file name is read in as an argument in the command line.

Because the documentation does not provide data, I generated my own dummy data (see `Generate Test Data.ipynb`).

Aside from typical pandas actions like filtering data, this next example implies Qt has its own datetime object, `QDateTime`. The example reads the data, filters it, and extracts two columns from it. One of the two columns, is converted from a column of UTC (datetime) strings to one of `QDateTime` objects.

Interestingly, this section provides example code which does not generate any output. Fortunately, it was simple enough to refer to the "Using UI Files" section and add the following snippet to the end of the example code:

Remark: the code also refers to a module called `qApp` from `QtCore` but that throws an error. I was able to fix the error by replacing this import with`QApplication` from QtWidgets and replacing all references to `qApp` with `qApplication`.

The reader may find the full file in my Github repo as `add_main_window.py`.

This section ramps up the difficulty a little but I find it more useful to focus on the big picture. The section has the following files with the following classes and dependencies of other files.

The file `main_window.py` is a small variation of `add_main_window.py` in the previous chapter. The difference is that `MainWindow` now gets passed a `widget` which it sets as the central widget via `setCentralWidget()`. Meanwhile, the file `add_table_view.py` is essentially `filter_data.py` from Chapter 2 but instead of printing data to the terminal, passes the data to form a `Widget`. The `widget` instance is then passed to form a `MainWindow` and this is shown to the user.

Observe that the original code results in the left column to adjust to the contents and the remaining space to be allocated to the second column. Rather than focus on fixing this sight for sore eyes, I decided to leave it be and simply acknowledge that there are various settings for adjusting the column width. In particular, while the example used `setSectionResizeMode()` and `setStretchLastSection()`, one can explicitly set a column width with `setColumnWidth()`

Similar to the previous except with `main_widget.py` defining a `Widget` class which contains a `QChartView`. In the Github repo, I placed the example code in a file called `main_widget_chart.py`. I then copied `add_table_view.py` from the previous chapter to `add_chart_view.py` and changed the import.

Finally, this final step adds a method to the `main_widget_chart.py` file of the previous chapter which plots the series. I named this new file `main_widget_chart_plot.py` and made a copy of the file `add_chart_view.py` as `plot_datapoints.py` to import from it.*

*After doing a test run, it occurred to me that the program assumes the data is sorted so I added a line in the `read_data` method which sorts the incoming data by the "time" column.

There are other examples but I decided to end here for now.

I skip this section.

There are some more sections but I decided to end here for now.
Relevant Links:
Getting to Know Qt for Python (Github Repo)
getting to know Python Qt

Popular posts from this blog

June 29, 2020
It seems like just about every six months I need to install PySpark and the experience is never the same. Note that this isn't necessarily the fault of Spark itself. Instead, it's a combination of the many different situations under which Spark can be installed, lack of official documentation for each and every such situation, and me not writing down the steps I took to successfully install it. So today, I decided to write down the steps needed to install the most recent version of PySpark under the conditions in which I currently need it: inside an Anaconda environment on Windows 10. Note that the page which best helped produce the following solution can be found here (Medium article). I later found a second page with similar instructions which can be found here (Towards Data Science article). Steps to Installing PySpark for use with Jupyter This solution assumes Anaconda is already installed, an environment named `test` has already been created, and Jupyter has already
Read more

August 23, 2020
Over the past few days, I wanted to isolate my understanding of the relationship between the selection made in a dropdown form input and other cells which depend on that selection. This exploration started with drawing a rectangle and using code from example notebooks with dropdown selections to cause a transition in the chart to occur (see Arc Diagram ). One added complexity with Mike Bostock's Arc Diagram notebook is a timeout that's added which will automatically trigger a change in the dropdown selection. Originally this code block had a bug which caused me some confusion, but it has been a valuable learning experience: Mike Bostock commented on the bug and fixed the bug, so I was able to update my notebook accordingly. In any case, contained in the notebook are three charts and each chart behaves different based on whether I refer to the dropdown form object by `myNumber` or `viewof myNumber.value` as well as where I make such references. In the first chart, I referenc
Read more

June 29, 2020
It was mentioned in passing in my previous post that I needed to setup `winutils.exe` in order to save my dataframe to a parquet file. It was not, however, mentioned why I wanted to save the dataframe as a parquet file. In short, the answer is for speed. First, let's load a dataset using pyspark, save it as a parquet file, load it back, and compare the time it takes to count the number of items in the file. Select your favorite medium-sized data file. I happened to be working with a CSV file that was about 7 GB, "data.csv" (composed of about 6.5 million rows and 300 columns). My data had a header, so I ran `df = spark.read.option("header", "true").csv("data.csv")` The default headings had characters not allowed by parquet when saving, so I looped through the columns and use regex to find and replace the set of illegal characters (" ,;{}()\n\t="): import re df2 = df for column in df.columns: new_column = re.sub(&quo
Read more